Interview of the month November

This month we talk with the very interesting Rachel Heller! Rachel grew up in the USA and joined the Peace Corps, which sent her to Malawi. Here she met her Dutch husband Albert, which landed her in the Netherlands.

In this interview we ask her about her time at the Peace Corps, her return to Malawi years later, views on her life in The Netherlands and which countries she would still love to visit.

Lisanne from CHAPTERTRAVEL: Good to have you, Rachel. Can you please give a short introduction about yourself?

I teach English and American Studies part-time at a teacher-training college, which allows me a fair amount of flexibility to travel and to write. My blog is called Rachel’s Ruminations, because that’s what I do: I ruminate on an idea for days or weeks, then write it down all in one go.

Could you please tell a bit about your job at the Peace Corps?

It’s not exaggerating to say that the Peace Corps is life-changing. I can’t possibly summarize everything I learned about the world and about myself. The Peace Corps told me to be a teacher, despite the fact that I had absolutely no training or experience. I taught French, but soon added a history class (That was my major in college.) and a couple of geography classes too.

In the first year, I taught 34 lessons a week, which any teacher reading this will know is a ridiculously heavy teaching load. But it was all fascinating and challenging and I loved teaching from the first day.

I also served as Dispensary Matron. That basically meant I pretended to be the school nurse without any medical training except first aid.

What would you give as advice to someone who wants to join the Peace Corps?

Think out your motivations carefully before you go, especially if you’re joining for idealistic reasons. You can’t save the world, so you might need to set your goals much lower. It’s okay to join up for selfish reasons – I did! – but be clear as to what those reasons are.

If you join, respect is incredibly important. You are an outsider and you don’t know better, even if the people where you are stationed live in very different ways that don’t make sense to you. Peace Corps service can be based on some pretty arrogant assumptions: that a young American kid with nothing but a bachelor’s in history can do pretty much any job and that the country they visit will be better off for it. Don’t buy into that; stay humble in all your dealings with locals. If you’re lucky, you’ll end up doing some good. Even if you don’t, you’ll learn and grow in ways you can’t even imagine. 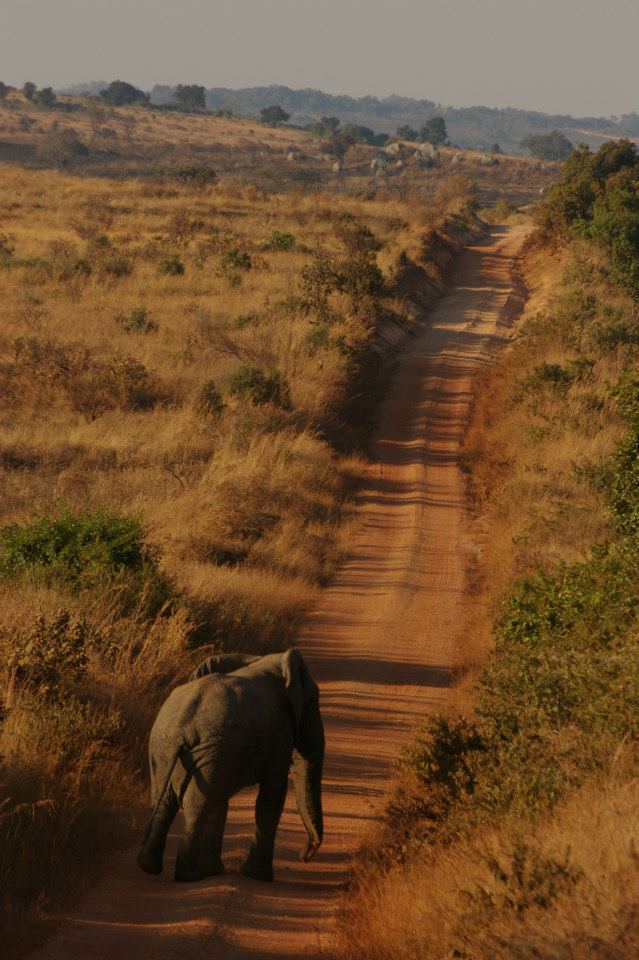 “An elephant that blocked our way as we drove into Nyika Plateau. It’s very rare to see an elephant at Nyika; it must have wandered over the border from Zambia.”

You wrote a book about a recent trip back in Malawi, can you tell us a bit about your book?

In 2012 my husband, Albert, my kids and I returned to Malawi. We showed the kids the places we loved and also visited a family that we both grew close to and kept in touch with. The book recounts our experiences in 2012 intertwined with stories from my Peace Corps years in the 1980’s. It ends up being a parallel consideration of how both Malawi and I have developed and changed over that time.

It also raises questions about development aid –like the Peace Corps –and its effectiveness. Speaking of which, if anyone reading this happens to be a literary agent, I’m nearly done with one last revision and I’d love for you to take a look at the manuscript.

How was it like to go back to Malawi? What has changed in this country? Was the experience like you expected it to be?

It was a very different context. I went back as a middle-aged woman with children and far more life experience, so I was able to see with better-informed eyes. So much had changed, yet it all seemed so much the same. Driving down the road, for example, I saw the same women carrying things on their heads and babies on their backs as they walked along the edge of the road. I saw the same scattering chickens and rickety market stalls and brightly-painted, dust-coated shops.

When I looked more carefully, though, I saw things I hadn’t seen 25 years ago. More houses have electricity, and even satellite dishes. More water pumps are available instead of water holes, so the water is safer. I saw more grain mills, so women don’t have to spend hours pounding maize to make flour. But there are also more coffin makers and orphanages because of the profound effects of the AIDS epidemic.

Politically Malawi has changed quite a bit too. When we lived there in the 1980’s, it was a dictatorship with only one political party and no freedom of speech. Now elections are hard-fought affairs between parties and a free press publishes critical articles. That was wonderful to see. 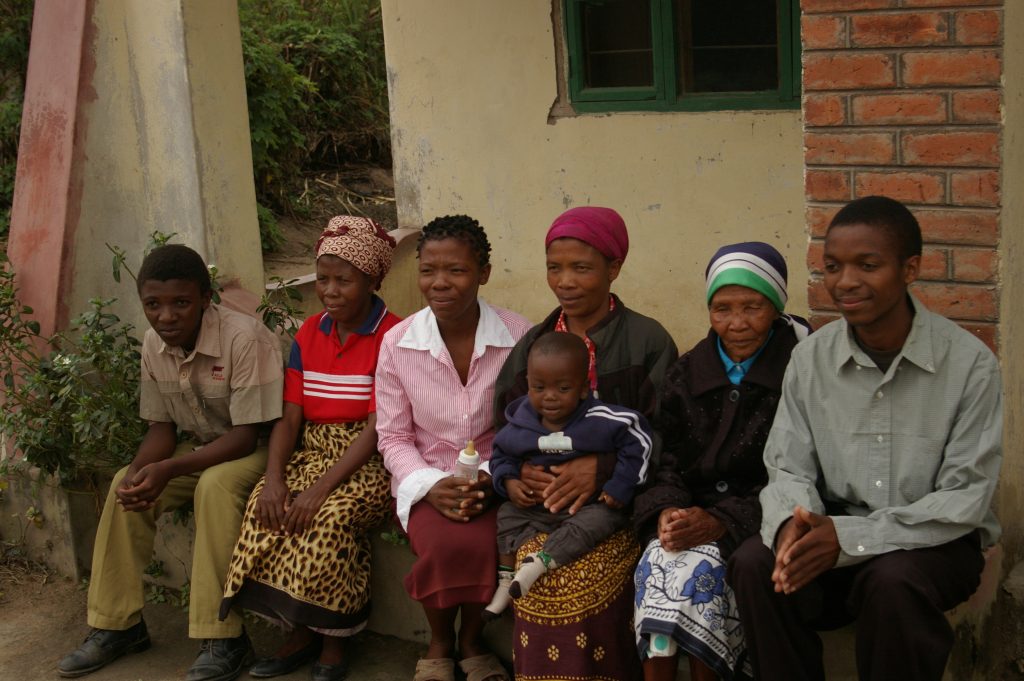 “In the picture of the whole family taken on our return to Malawi in 2012, Christina is the second from the right. The two boys on the ends are her grandsons who are now in college.”

On a personal level, visiting “our” family after so many years was emotional for us. Christina worked for me as a housekeeper and then for Albert after I left. Back then she took care of me like a mother. Now she’s in her 80’s and nearly blind, but she was so happy to see us again. We got to visit with the rest of her family too, including the two grandsons we’re putting through school.

It was hard saying good-bye in the knowledge we’d probably never see Christina again. It was also discouraging to see their poverty. While Malawi has grown and we could see signs of progress in the general standard of living, this family doesn’t seem to have shared in that progress. That’s why it’s so important that Christina’s two grandchildren finish school, including college – no one else in the family has – so they can support the family.

What is it like to live like an expat in the Netherlands? You say it feels like home most of the time, can you elaborate on this? And what was it like in the beginning when you just moved there?

I’ll start with the last question first. In the beginning, after the initial honeymoon period when everything was new and interesting, it was hard to feel at home in the Netherlands. I didn’t speak the language, for one thing. People in the Netherlands are often very good in English, but it still creates a separation if you force everyone around you to speak their second language. But I was already in my 30’s and learning Dutch took me years of effort.

While I speak fluent Dutch now – more than 19 years later – it still often feels like I’m an alien. This is partly because of my job, where I speak English and essentially represent America in the English department where I teach. Outside of work, when I speak to people in Dutch, they immediately notice my accent and that often turns the conversation to America. People find America, and especially American politics, fascinating, and they want me to explain it to them. 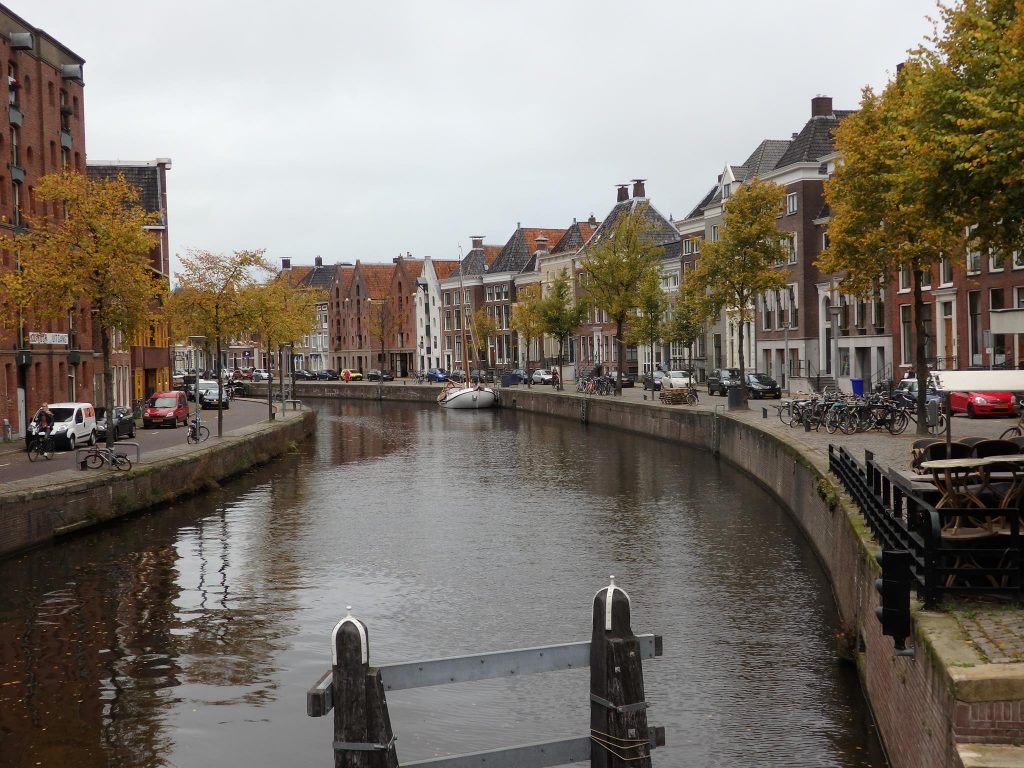 At the same time, “home is where the heart is,” right? Albert and I have made a home for ourselves and our children here, and it’s a good place to be. It was a great place to raise our kids because they could run free and get around by bicycle at a very early age. In the Netherlands, we are free of the worries about health insurance that many Americans deal with. We pay for our family health insurance – and the rates are distinctly cheaper than in the US – but if we both lost our jobs we’d all still be covered.

I also love their attitude about so many things. Dutch people travel by bike and/or public transportation whenever possible, just as a matter of course. They are, in general, open and honest with their kids about sex, so kids make much more informed and safe choices about what they do or don’t want to do. Marijuana is more or less legal in small amounts, so it loses the lure of the forbidden that I remember from my teen years. This kind of pragmatism and openness is healthy, in my view.

Do you still visit the US on a regular basis?

No, only once in several years. Most of the Americans I know in the Netherlands visit more often, but that’s because they visit their aging parents. My parents both passed away before I moved here, so I feel less of that need to visit. I have very little family left in the US: two sisters and some scattered cousins. I keep up with them as best I can via internet.

Our daughter is doing her Master’s in the US right now and will come home at Christmas. In the meantime we have weekly conversations via Skype. But that’s only temporary; I hope she’ll end up looking for a job here in Europe.

When I go to the US, I absolutely love it at first. I eat all the “memory foods” I can’t get in the Netherlands: good bagels, for example, and York peppermint patties. I love wandering through a Target or even just an American supermarket. And I spend hours in book stores; I also do that when I visit the UK. It’s a delight to browse where all the books are in English.

After about two weeks in the US, though, I’ve usually had enough. I feel more of an outsider in the US than in the Netherlands these days, especially when any political topic comes up in the conversation.

The Netherlands is completely flat – different than where Rachel is from!

A better question would be Which country is not still on your bucket list? I want to see everything.

I’d love to see the southeast Asian countries, and the West African countries, and Russia and Mongolia and the South Pacific islands. I’m curious about the far north of Scandinavia and also Iceland and Greenland and Nunavut and Alaska, though I’m not a cold weather person so I’d like to see them all in the summer. I’ve barely touched on Central America and haven’t seen any of South America. And there are so many more Caribbean islands to visit! So my answer is: pretty much everywhere is still on my bucket list.

So much to see in this world! Thank you so much Rachel for your time!