Outback diaries: almost out of here! 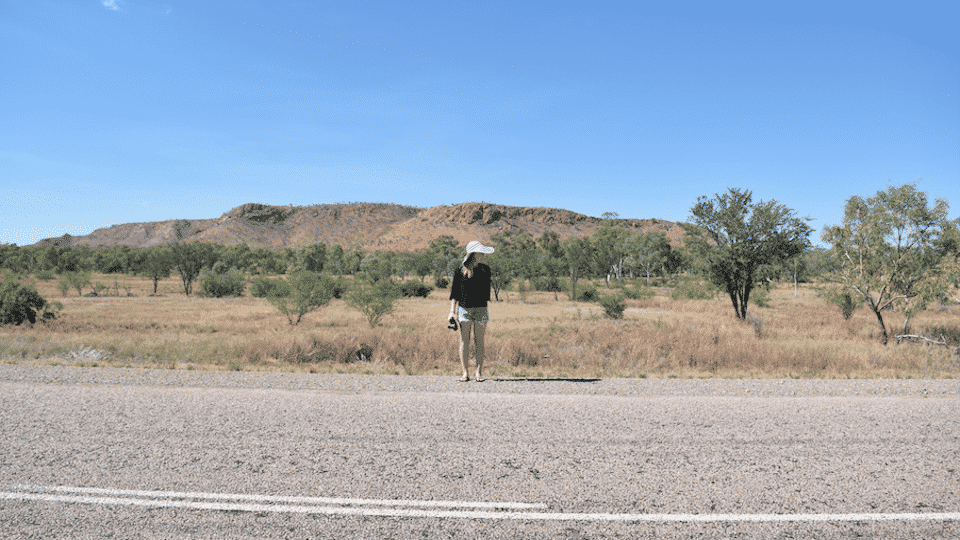 If you follow our blog a bit, you know we’re currently working in a hotel in the outback of Australia and have been for the last five months. You can read more about the experiences we have in this hotel and unique location in part 1, part 2 and part 3 of our personal blogposts. Also, make sure to check the destinations we’ve visited while we were here!

It feels like just a week ago that I’ve written my last personal blogpost. This while two months have passed and a lot has changed. For instance, a lot new staff members have been hired and we’ve got two new dogs in the hotel. They came right around the time I was starting to give up on this place. Although we’ve really gotten used to working ridiculously much, you still have these moments of an, well, almost nervous breakdown.

If you follow us on Instagram you know that two months ago we got a cute little puppy called Bella. Our general manager got her from the local dog pound, as one of the dogs there gave birth to a lot of puppies. All of a sudden we had this little adorable and innocent furry friend in the office. At that time we were badly understaffed, so we all claimed that it was a way to keep us happy. If that was the reason for getting Bella, it worked. Unfortunately after a few weeks she wasn’t allowed in the office anymore, because she started barking at the guests who came to check in. Now we couldn’t cuddle her anymore every time we went to work.

Since we started here there was also a local dog that would show up whenever we had drinks outside. It was as if he knew that we were all together and he wanted to hang out with us too. Eventually we named him Green Can, referring to the popular beer Victoria Bitter that comes in a green can. He was the dog of one of the local families and when they moved to another city they didn’t want to take him with them. That’s why it was decided he would just stay at the hotel and the staff would take care of him. He is probably the sweetest dog I’ve ever met! Everyone wants to take him home, he is so loved. Unfortunately that doesn’t count for every animal in town. There are a lot of stray dogs and cats in this town. It makes me very sad, because a lot of them get put down.

The week before the new staff members came dropping in I was working in housekeeping for six days in a row (sometimes more) and every night in the bar as well. One day it even went a little bit wrong, as I was so tired from a very long day of housekeeping – I was seriously fighting the time and barely took a break. The bar was very busy that night, meaning that one I had to work harder, and two I had to stay a lot longer. I just didn’t really function anymore. When I went to restock the Jim Beam cans,  I thought “why not just rip one side of the box open and put the whole box in the fridge?” We do this more often when it’s busy. However, I first ripped the box open and then tried to put the box on the highest shelf. While I was trying to reach the shelf, I knew it was going wrong, because the box was too big for the shelf. Of course, three cans fell out of the box, and one straight into my face. Result: I had a deep cut and I looked like I just committed a murder. My hands and face were all bloody. My duty manager sent me home, where I couldn’t really fall asleep because I was still so hyped up from working all day, even though I had the same long day the next day. Long story short; I was tired, I was no longer thinking straight and I have one more scar right between my eyebrows. Yes, it’s still there, an amazing souvenir of the Kimberley Region.

Luckily, right after I told my assistant manager that I wouldn’t manage it much longer to work these kind of hours, they were getting two new staff members (an Australian couple). And the week after that another two new staff members (a Dutch couple, just like us). I immediately got less hours. A lot of staff members actually started worrying about getting too little hours – while most people still had at least 40 hours. But I was savoring it. I could finally put more time in my blog – which takes a lot of time too!

Since the new people arrived we’ve been more of a team as well. It’s far from perfect, but we made some great new friends and more often than before we all have some drinks together and play pingpong or Uno. Also during housekeeping it’s no longer just me and two other girls. Sometimes we’re with more than six people, which is amazing. We still have to work really hard, but sometimes we have a short day and already finish before lunch. This makes it more bearable for me to do housekeeping six or more days in a row. Sometimes we still have shitty days though – then the roster doesn’t make much sense and we’re scheduled with just two or three people and there are a lot of rooms. Then I realize how crazy hard I was working these first three months.

One of the things I’ve definitely learned from living in the outback is that I shouldn’t take anything for granted. On our days off we are often confronted with how little there is to do in our town. Here we don’t have things such as different restaurants, cinema’s, shops or other entertaining venues. We can’t always go and explore the amazing places there are in the Kimberley, because most of it is a pretty long drive. Lately we’ve been walking around a little more, and it’s really, really beautiful. But after a while the landscape gets a bit boring too. Even the amazingly pink and purple sunsets we get every night is getting a bit boring. I often see it when I go and start my bar work and sometimes I’m just like mweh.

Right at this moment Jeff and I are housesitting for the local weatherman and trivia night host of our bar. He’s gone for ten days and didn’t want his house to be empty for so long, because of the amount of break-ins in town. For me and Jeff this is amazing. Although we’re lucky to get dinner made for us every night at the hotel, it’s so nice to decide what we’re going to eat and cook some food ourselves for a few days. Now we have a place with a living room and kitchen and well, everything an average place has. You don’t realize how luxurious a couch is or a kitchen is until you’ve been without for over six months. Right now Jeff and I are lounging in the garden, me typing away on my laptop on the bench outside and Jeff reading the news in a hammock. Each morning in this place I get to actually take a good shower and make a good breakfast without waking Jeff up. Back in the Netherlands I didn’t realize how great it was to have some space, and took all the comfort I had for granted.

But still, even though the time is really flying by and it’s getting a bit better, we are getting a bit impatient. Yes, it’s really a very unique experience to live in this place we’re living. Everywhere in Australia it’s currently winter and it’s still like summer here. We’ve seen so many beautiful places we would never ever go if we wouldn’t live in the outback. We’ll probably never come back here after we’re done too. But we’re so excited to start traveling again. To be honest, I’ve been counting the months, weeks and days that we can go traveling again since we started here. I just can’t help it.

But just five more weeks and we’re out of here. We’ll finally see the ocean again. Finally can have dinner at a restaurant and shop at a real supermarket. But most importantly; do what we want to do every day!

We can already give you a sneak peak of our plans after the Kimberley: First we’re going to Darwin and take on a tour through Kakadu National Park. Then we’ll drive up to Broome and Perth, explore the west coast of Australia a bit and eventually sell our car. We finish our trip in Australia in Perth, as we’ll fly from Perth to Nepal! Can’t wait!

Luckily we still have some adventures lined up in the Kimberley as well. Lately we’ve been exploring a little bit less, because we’ve been focused more on work. But we have a great friend here that invited us to go to the Purnululu aka Bungle Bungles in two weeks, which has been on our wish list since we got here! 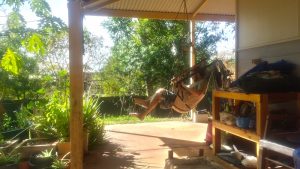 Jeff in the hammock. 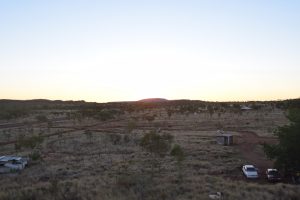 View from the lookout in town. 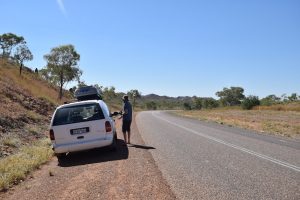 Ready to get back on the road.

There is one more planned personal blogpost coming up from our adventures in the outback, which will be posted when we leave. Keep your eyes peeled!