A Visit to Purnululu National Park and The Bungle Bungle Range 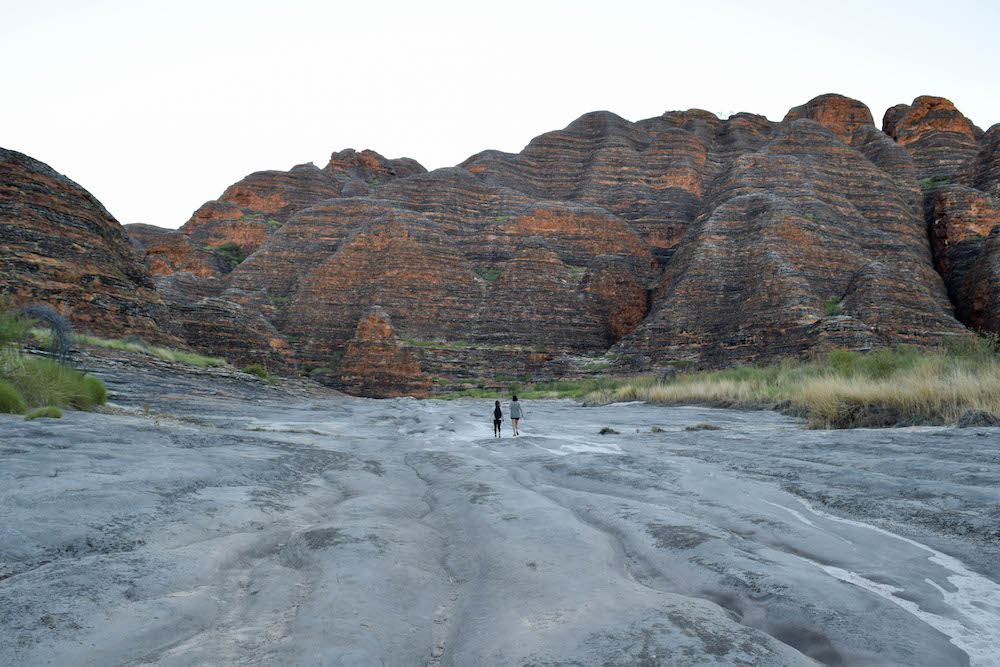 Purnululu National Park, located in the Kimberley Region, includes the stunning Bungle Bungle Range; a very unique landscape of large rocks or domes that look like giant beehives. Although it has been around for 350 million years, the Bungle Bungle Range was not discovered until a documentary team brought it to the world’s attention in 1983. Before that only local Aboriginal people and pastoralists were aware of this stunning landscape. Nowadays the maze of domes that is the Bungle Bungles is one of the Kimberley’s most popular destinations. When we arrived in the Kimberley six months ago, we already knew that we had to visit Purnululu National Park while we were so close. Last week we could finally visit this magical place. Want to know more about this beautiful landscape? Keep on scrolling.

Purnululu National Park, also referred to as the Bungle Bungles, is 160km away from Halls Creek and covers almost 240,000 hectares of remote area. The Bungle Bungle Range is located south of the park and covers 45,000 hectares. This part is one of the most striking geological landmarks in Western Australia. The name Bungle Bungles comes from a nearby cattle station. The name Purnululu, meaning sandstone, was given to the area by its traditional Kija custodians.

In 1987 the Bungle Bungles and the surrounding areas was established as a National Park, due to the importance to the Aboriginal culture and tourism potential. In 2003 the national park became listed as World Heritage for the area’s incredible natural beauty and it’s outstanding geographical value.

How were the Bungles formed?

The Bungle Bungles is known for its striking domes. The domes are cone karst formations, made of sand and gravel deposited about 360 million years ago. Erosion by creeks, rivers and weathering in the past 20 million years has carved out these domes, along with amazing chasms and gorges.
The colours of the domes – orange and grey – are caused by the presence or absence of cyanobacteria. The stripes on the dome resemble the striped skin of a tiger. Dark bands indicate the presence of cyanobacteria, which grows on layers of sandstone where moisture accumaltes. The orange bands are oxidized iron compounds that have dried out too quickly for the cyanobacteria to grow. This all created an incredible landscape that is quite different from the landscape in the rest of Western Australia.

What to do in Purnululu National Park 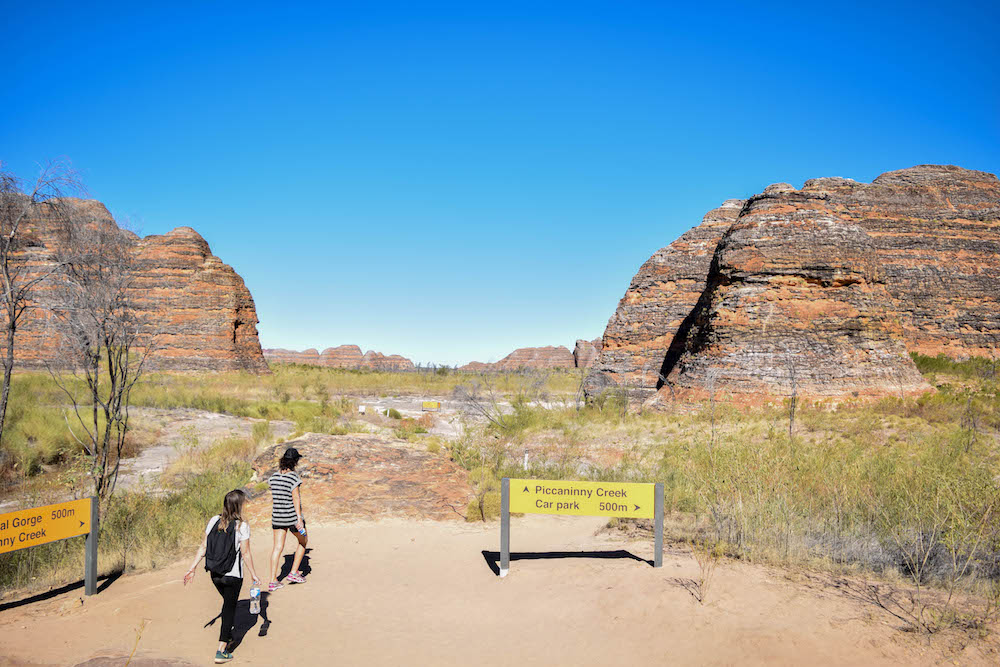 When you want to see the Bungle Bungles up close, walking trails are the best way to explore this park. It doesn’t matter if you aren’t much of a walker, because there are options for everybody. You can choose to either go on a short stroll or decide to go on an 10 kilometer trek. However, the trails are mostly quite rough and rocky. Be sure to wear your good shoes and bring lots of water. It can get very hot, so dress up for the heat and start your walk either in the early morning or late in the afternoon. There are two sides of the part, the north and the south.

North of the park

Echidna Chasm is a moderate walk from the carpark. It does have a short climb near the end that might be a bit challenging. Once you get there you can experience the beautiful 200 meter chasm with striking color variations. At certain times the sun beams through the chasm.

Mini Palms is a quite challenging walk with some steep slopes. The gorge is a narrow chasm filed with palmtrees and is a stunning sight to see.

Kungkalanayi Lookout has a panoramic 360-degree view of spinifex-covered ridges and part of the Bungle Bungle Range. Other walks on the north side are: Stonehenge, the Escarpment, Homestead Valley, Osmand Lookout and the BloodWoods Lookout.

South of the park

Cathedral Gorge is probably one of the most popular spots in the Bungle Bungles and also happens to be one of the easiest walks in the park. This geological formation with amazing acoustics looks like a natural amphitheater. Here you can sit down on the rock ledges and admire the overhanging rock walls and the water pool in the middle of it all.

Piccaninny Gorge Trek is one of the best walks in the Bungle Bungles. It’s probably also the most difficult, longest and adventurous walk. Here you can experience the Bungle Bungle Range in full glory, while you follow the eroded creek bed and are surrounded by the giant beehives look-alike domes. Just walk as far as you want to go, or even spent the night by setting up camp. You do need to register at the visitor centre if you decide to take this trek.

The Window is a natural hole in the sandstone structure. While we were there we could see the moon through it, giving it an even more interesting view.

Whip Snake Gorge is the longest trail of the park and goes over uneven surfaces of soil, sand and rock. This Gorge is a small pool, that was actually completely dry when we were there. Other walks on the south side are: the Domes and Piccaninny Creek Lookout.

For many people taking a flight over the Bungle Bungles is definitely a bucket list item. Either with a light plane or helicopter flight you can experience the 360 million year old rock formation in all it’s glory from above.

Things you need to know when visiting Purnululu National Park 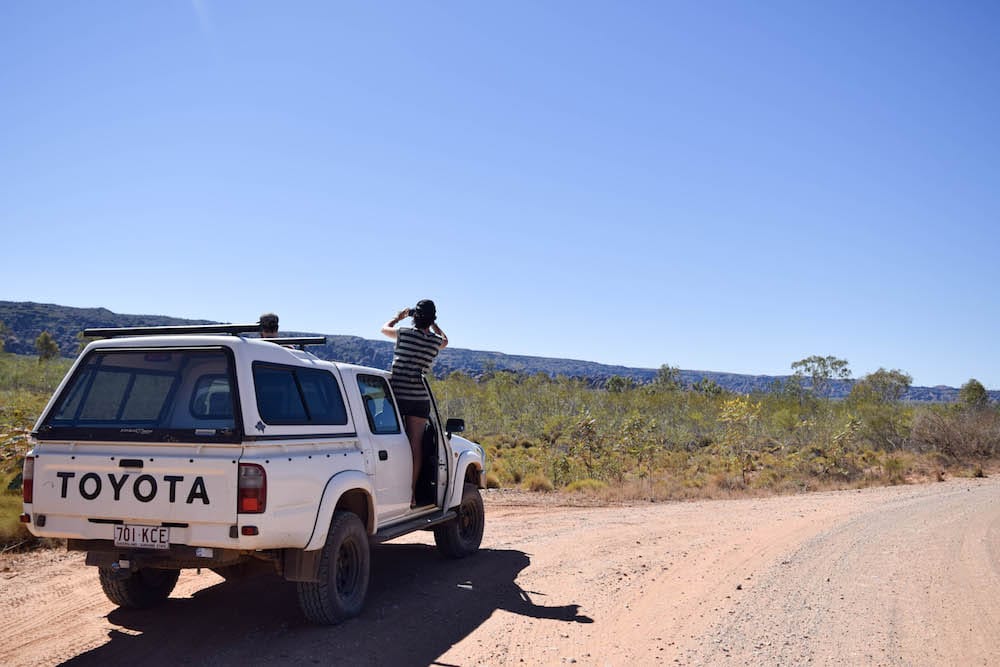 To access Purnululu National Park a 4×4 wheel drive is necessary. It is definitely recommended to take enough fuel for 200 kilometers of driving when turning off the Great Northern Road to the visitors centre. It is not possible to get any fuel at the national park itself.

Once you reach the visitors centre, you have to pay a vehicle entree of 12 dollars – not too expensive right? If you plan on camping at night – which we really recommend – you can either choose to camp on one of the two campsites inside the park or choose to camp just outside of the park. When you want to camp in the park, you have to book online in advance.

Purnululu is divided in a northern and a southern area. Both areas have their own campground: Kurrajong Campground in the north and Walardi Campground in the south. Walardi is in the direction of the domes, Cathedral Gorge and Piccaninny Creek, while Kurrajong is near Echidna Chasm and Mini Palms. Both campsites offer bore water – so basically bring your own water, as bore water has to be boiled before drinking – and toilets. There are no showers.

You can also choose to camp just outside of the national park. For this you don’t need to book a campsite in advance. Also, one advantage of camping just outside the park is that here you are allowed to have a campfire, while it is not permitted anywhere in the park.