The Kimberley Region in WA

Maybe it’s about time we tell you a bit more about the magnificent and extraordinary large area that is called The Kimberley region, as we can be considered part of the locals after two months of living and working here. The Kimberley is located in the northwestern corner of Australia and because of it’s remoteness, it’s considered to be part of the outback. In recent years, the Kimberley has become more and more popular and is on the bucketlist of many travelers. Why is that? Well…

The Kimberley Region is enormous

Even if tourism in this area is increasing, you won’t really notice a lot of tourists yourself. The area is about 422,000 km2 big, which is about three times the size of England. So enough space for everyone to roam around. Even though it’s this big, there is only one sealed road in the whole area! Did we already mention you really need a 4x4wd? If you want to explore the Kimberley properly you really need to consider buying or renting a 4x4wd, as there are a lot of unsealed roads that take you to some spectacular places. This means the Kimberley is really for the adventure seeking travelers, who love to uncover some unique places without too many tourists lurking around!

It has an exotic culture and history

The remote Kimberley region in north Western Australia was one of the earliest parts of Australia to be settled. Around 40,000 years ago the first arrivals came here from the islands that are now known as Indonesia. Currently, the Kimberley population includes around 44% Aboriginal people, which is a large amount compared to the rest of Australia. The indigenous people are still continuing their ancient culture that is tens of thousands years old. The area contains thousands of rock art paintings and drawings, known as Wandjina rock art. You can find these art works in outback bush galleries.

The nature here is untouched and pure

Don’t be confused when we name our current home the outback and don’t think you’ll only find dry places here. The Kimberleys has two seasons: the dry and the wet. Most of the year it’s hot with temperatures above 30 degrees Celsius. During the wet season, monsoonal rains take over, making most of the area inaccessible. Some of the largest rivers in whole of Western Australia are located in the Kimberley.

The area is so big that there is a deep contrast in landscape. Imagine pristine lakes, waterfalls, gorges, beaches, volcanic remnants, ancient mountain ranges and the rough outback; and all of that in a deserted beautiful place that is all pure nature. There are a lot of incredible National Parks, such as Purnululu or Bungle Bungles, Prince Regent, Mirrama, Geiki Gorge National Park, Tunnel Creek and more. All that is what makes the Kimberleys such a unique place, and that is probably why more and more tourists want to come and explore this area.

Check out some amazing pictures of the Kimberley Region in WA. 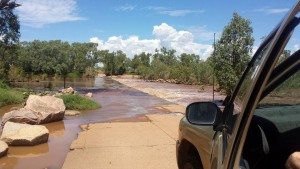 The road was totally flooded! 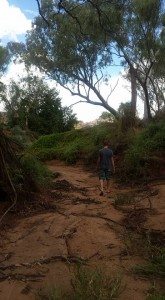 This is a dry river bed at Geiki National Park.

At the end of the dry river there is water! 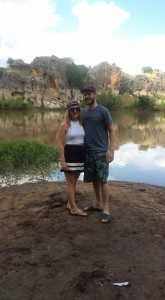 Us at Geiki National Park. 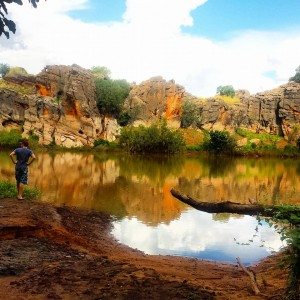 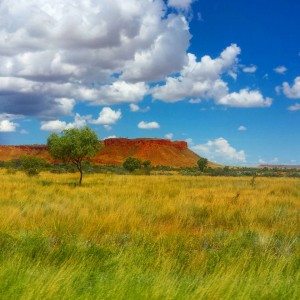 You’ll have beautiful scenery everywhere around you. 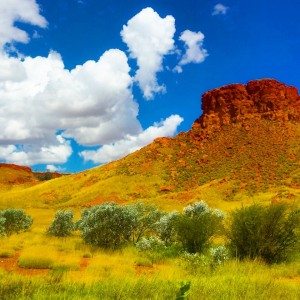 We took this one while driving in the Kimberleys.

We took this one while driving in the Kimberleys. 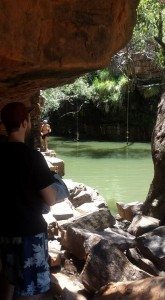 The Grotto, still our fav in the Kimberleys!