A Short Guide to Turkistan, Kazakhstan 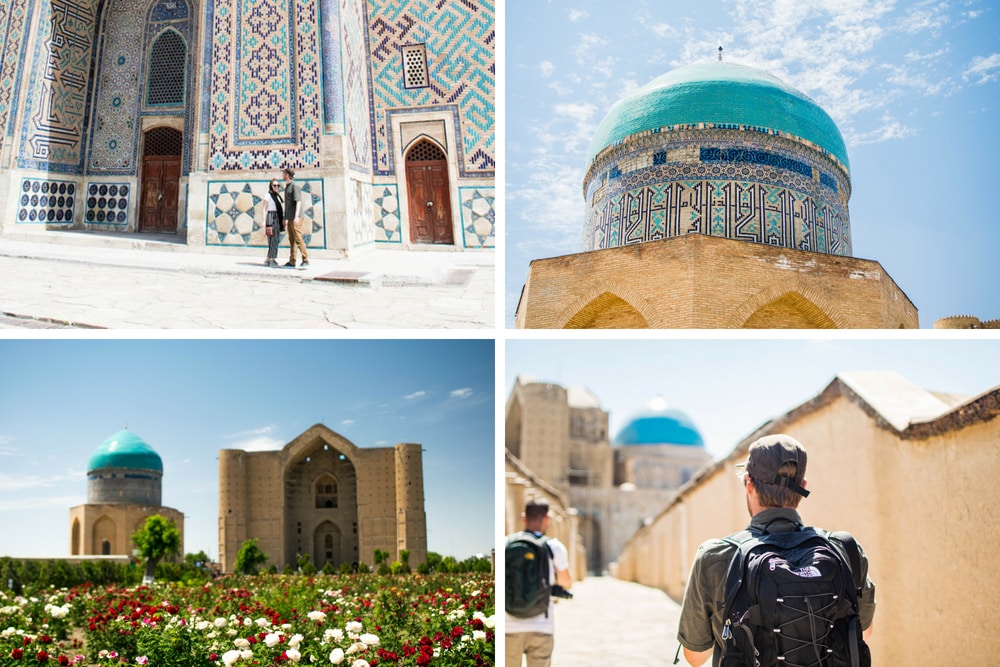 Turkistan in Kazakhstan, also known as Turkestan or Turkiston, is a city in the Kazakh Desert. Don’t confuse this location with the region between Siberia and Tibet in Central Asia. This guide is for the city Turkistan that is located in Kazakhstan, 160 kilometers from Shymkent.

This little guide to Turkistan is mostly to inspire you to visit this special place in Kazakhstan, Central Asia and provides some basic information. In Turkistan, a relatively well preserved 1600-year-old city, you’ll find ancient mausoleums, archaeological sites and other fascinating human creations. This article includes the highlights of Turkistan: the Mausoleum of Khoja Ahmed Yasawi, Mausoleum of Rabiga-Sultan Begum, Hilvet Semi-Underground Mosque and The new mosque. All these highlights are located very close to each other and can easily be visited in one day. If you have some extra time, you can also visit other ancient cities located on the Silk Road. Next to some photos, I also share some useful info for your visit, such as how to travel to Turkistan and where to sleep. Enjoy!

Be sure to also check out our other articles on Kazakhstan:
Two week Itinerary for Kazakhstan
20 Things to do in Almaty

The Highlights of Turkistan, Kazakhstan

The Mausoleum of Khoja Ahmed Yasawi is definitely the highlight of Turkistan. It’s Kazakhstan’s greatest architectural monument and most important pilgrimage site. The mausoleum is dedicated to the first great Turkic Muslim holy man, Kozha Akhmed Yasaui and was built by Timur in the late 14th century. Even though this building is unfinished, as Timor died before it was completed, it’s still one of the most beautiful mosaic work you’ll ever encounter.

It isn’t allowed to take photos inside of the Mausoleum, so we only took about a hundred and fifty shots of the beautiful exterior of the building. A small selection can be found below. 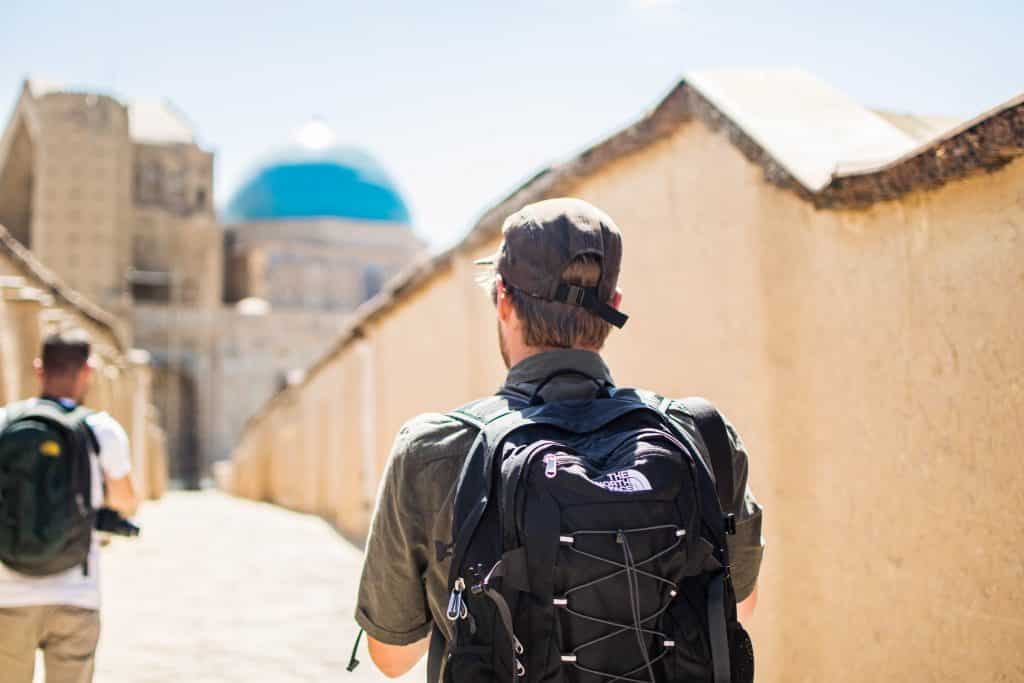 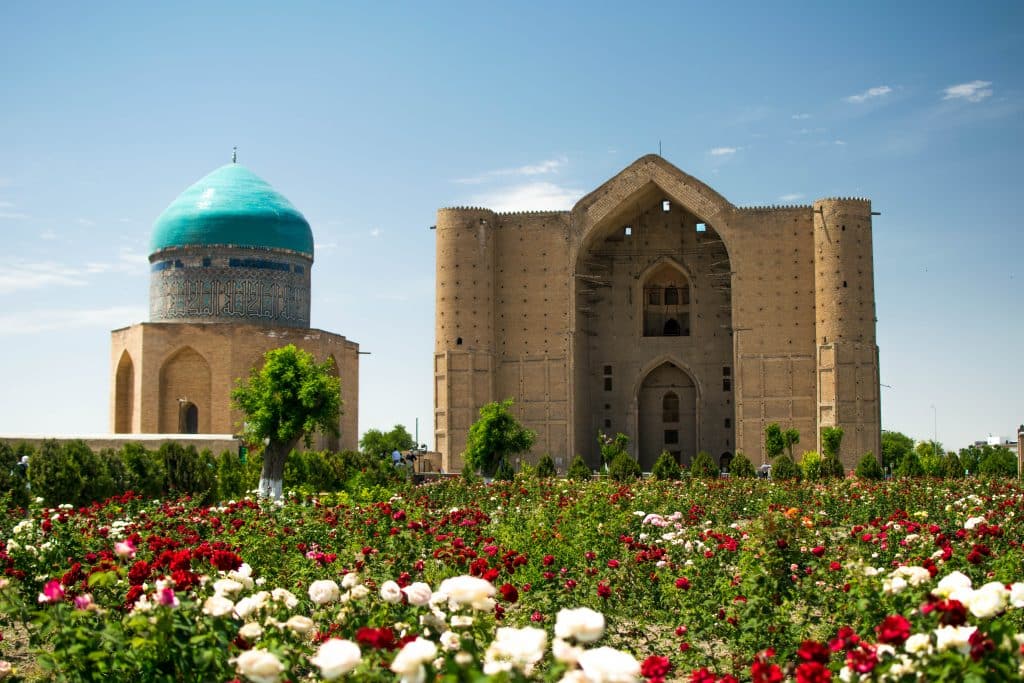 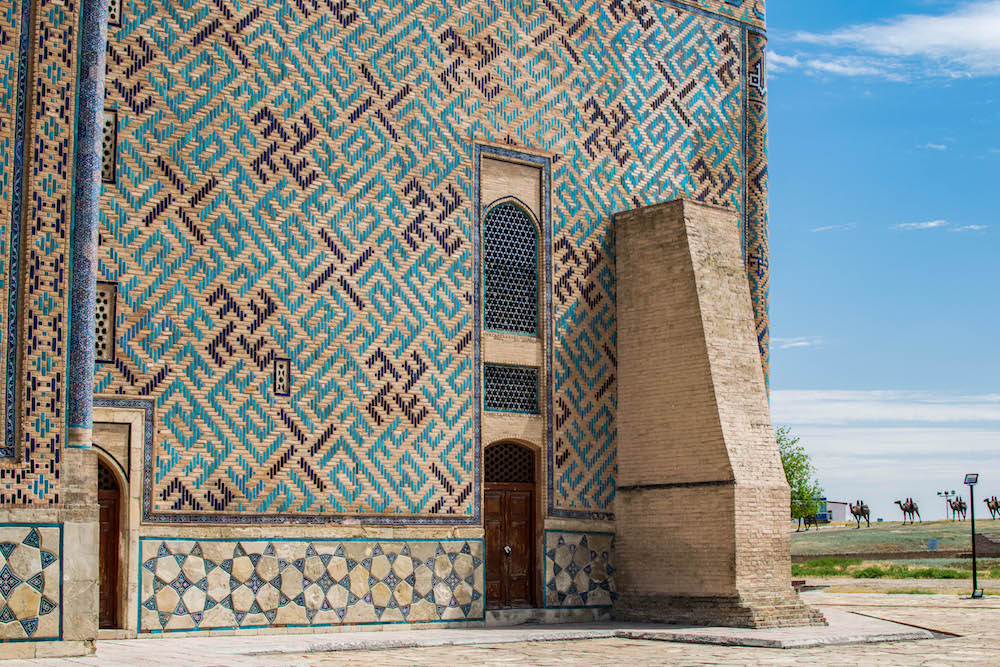 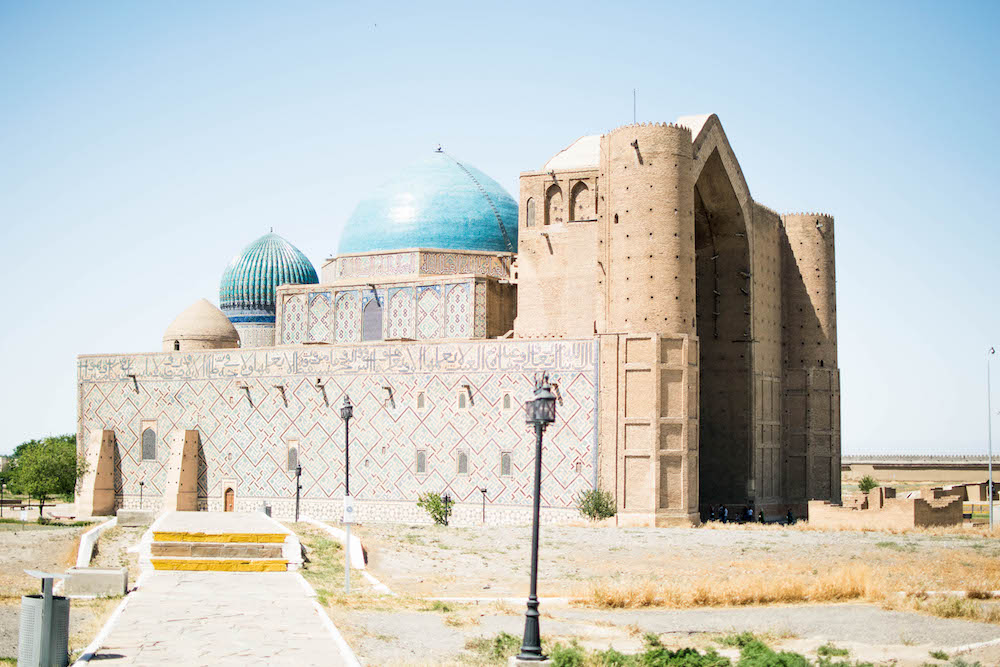 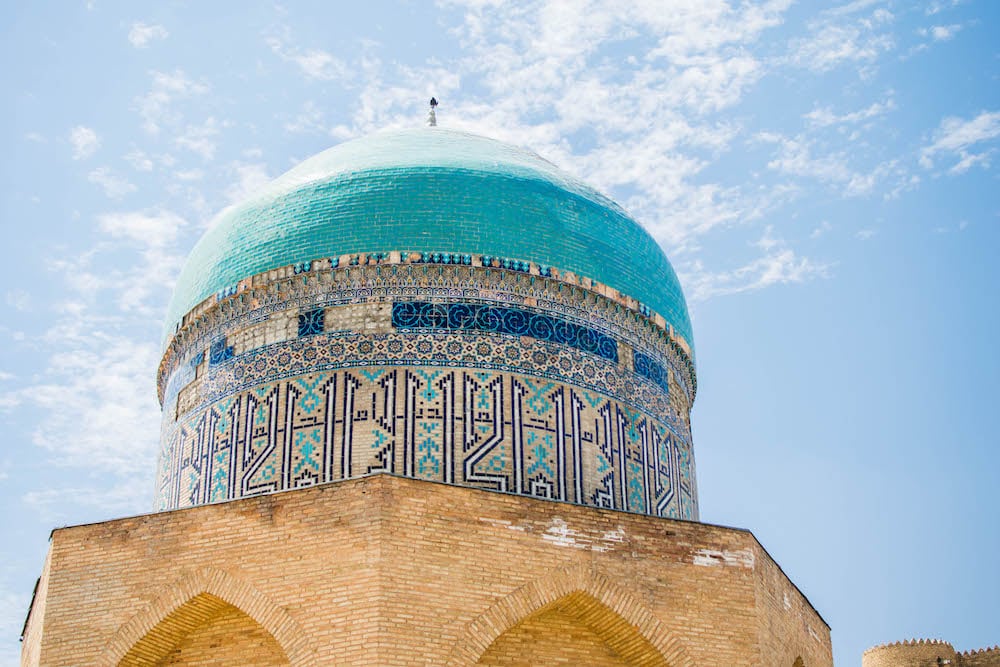 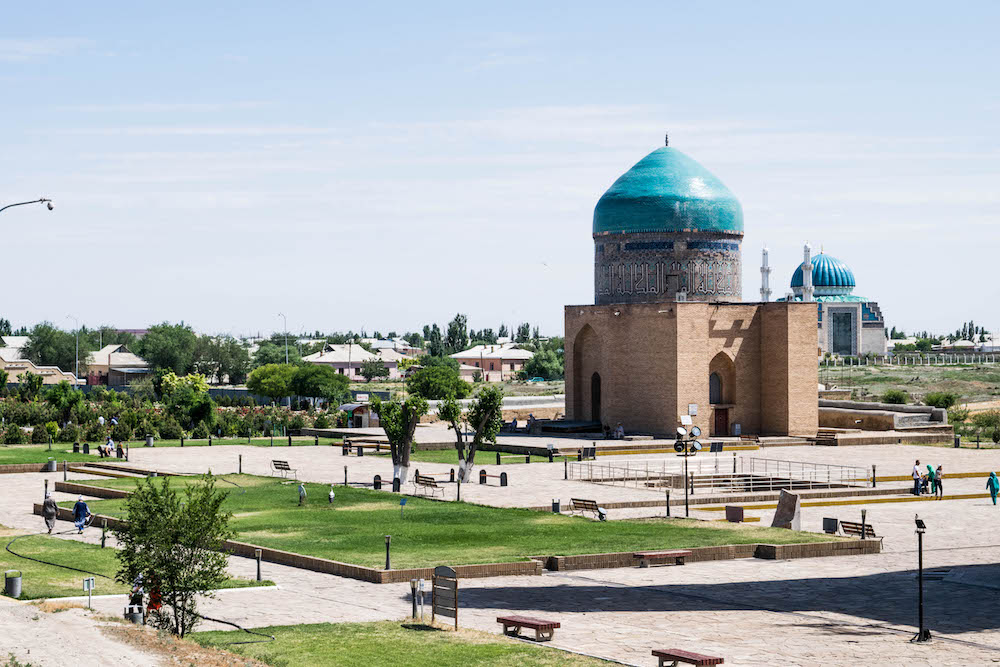 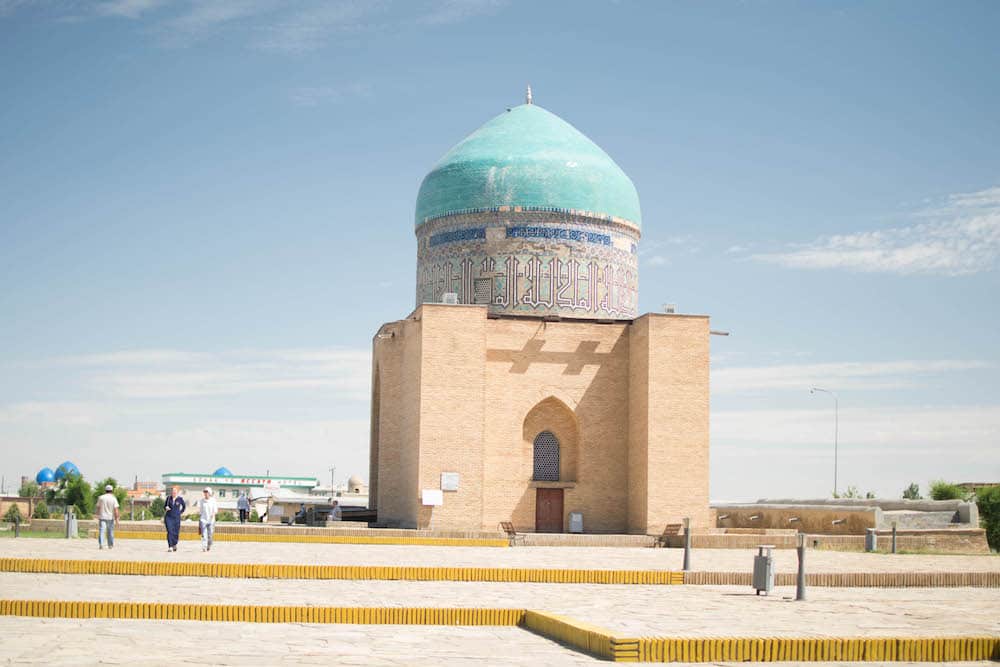 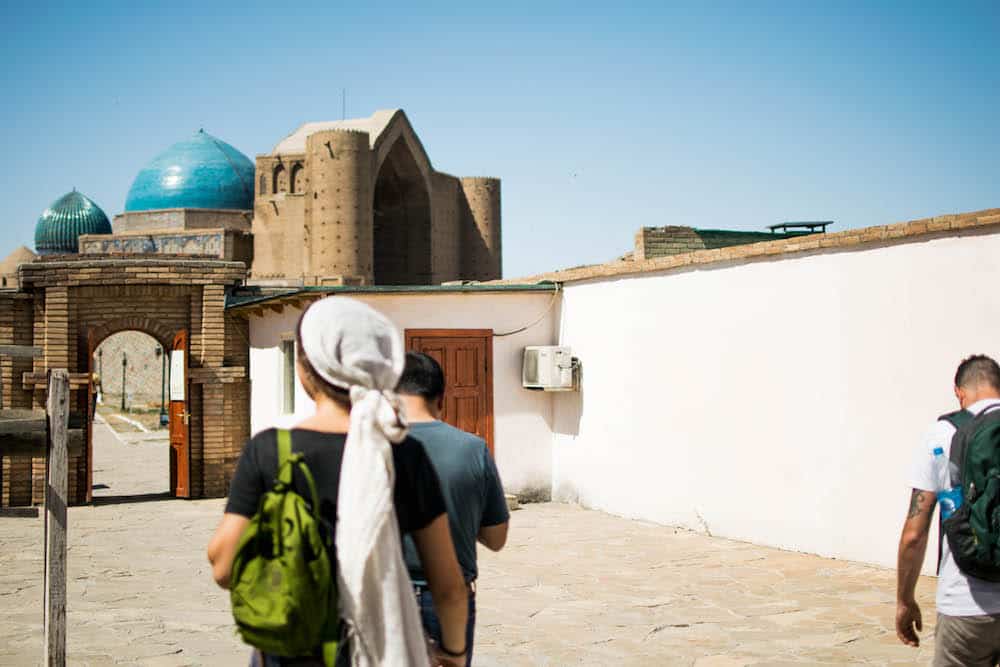 This new mosque in Turkistan was built in the name of Khoja Ahmed Yasawi. Unlike the other structures in Turkistan, this mosque has just recently been built and opened. Unfortunately, I can’t find lot of information on this mosque, but I do know that it is a place of worship, so if you go in make sure to cover yourself properly (hair, shoulders and knees).

The architecture of the new mosque is of course a lot more modern, but definitely also impressive. Even though it doesn’t have a historical value, it’s still very interesting to visit and the building does have a lot of beautiful details. And while you’re so close to it, why not just have a little peek inside? 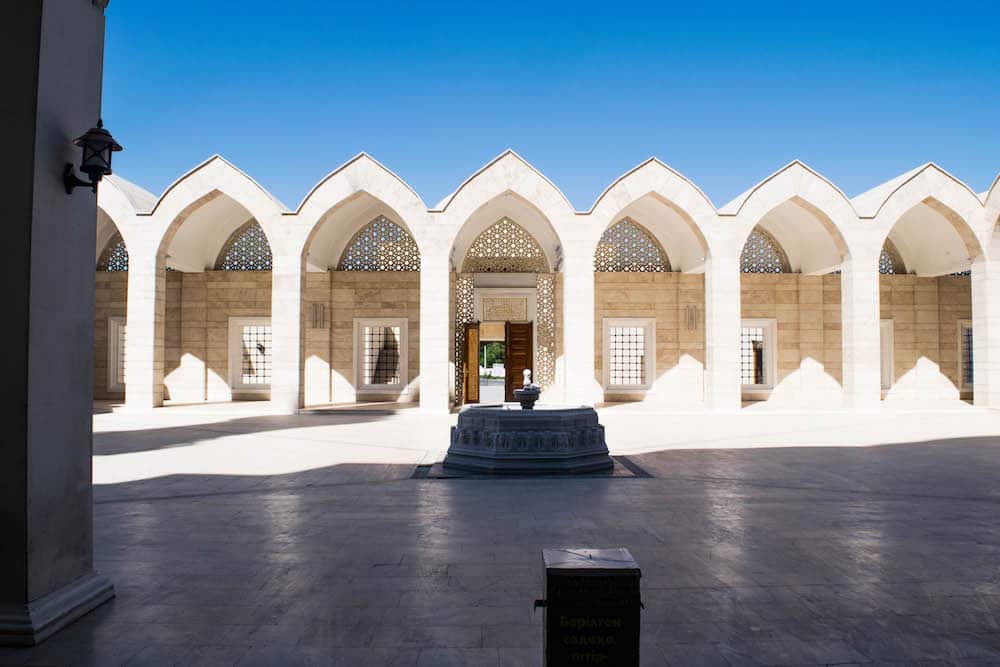 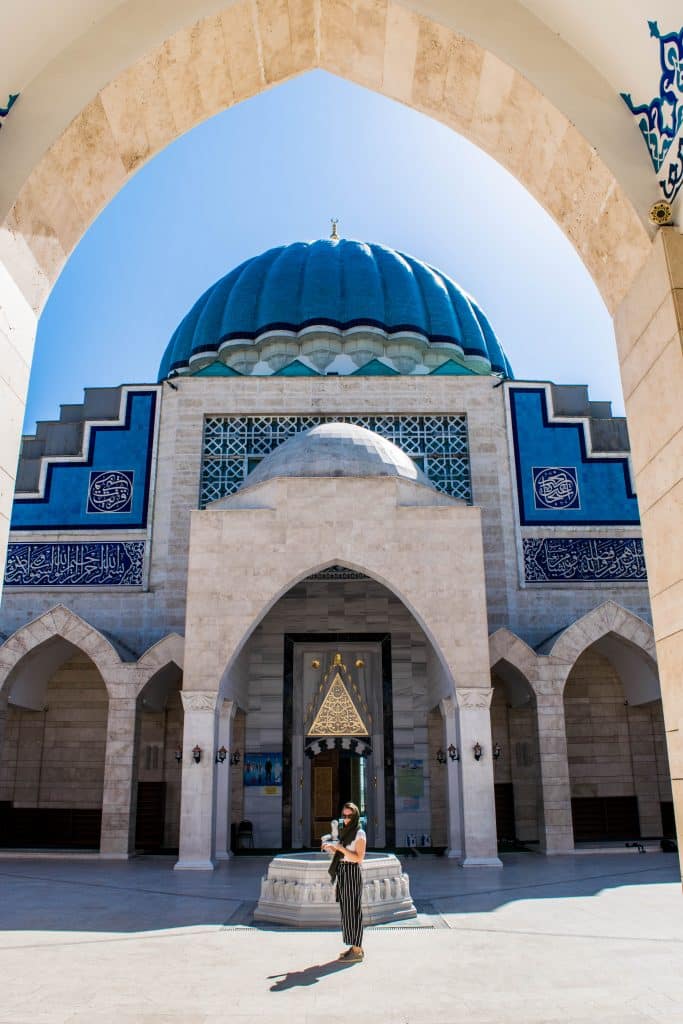 5. Ancient cities and mausoleums around Turkistan

Next to the beautiful Mausoleum of Khoja Ahmed Yasawi and the other impressive structures on its grounds, there are also interesting places to visit around the city of Turkistan, such as ruins of ancient cities. There are two noteworthy ancient cities, namely Sauran and Otrar. We only visited Otrar and went to the Fortress of Shakhristan and Arystan Bab Mausoleum. 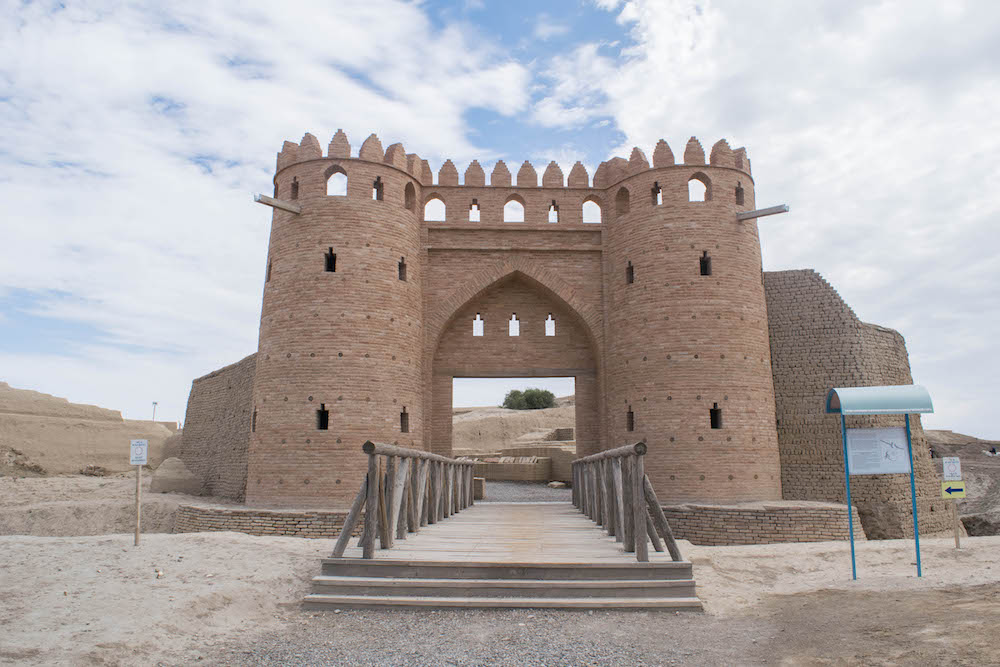 In the city of Otrar you can find the Aystan Bab Mausoleum. Arystan Bab was the mentor of Khojda Ahmed Yassawi and the pilgrimage to the great mausoleum in Turkistan is often followed by a visit to the mausoleum of his teacher. 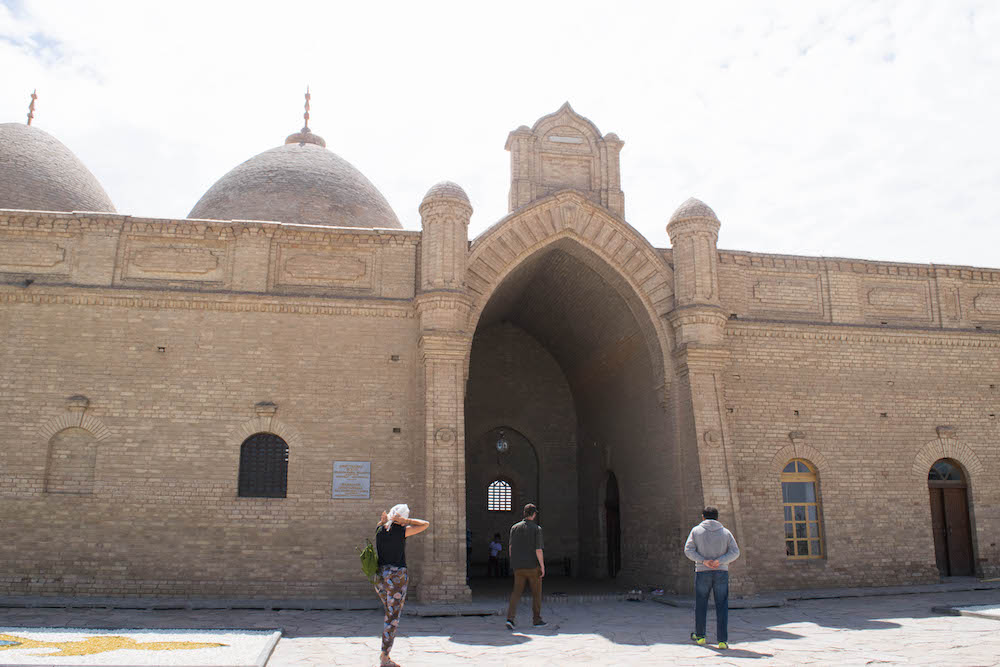 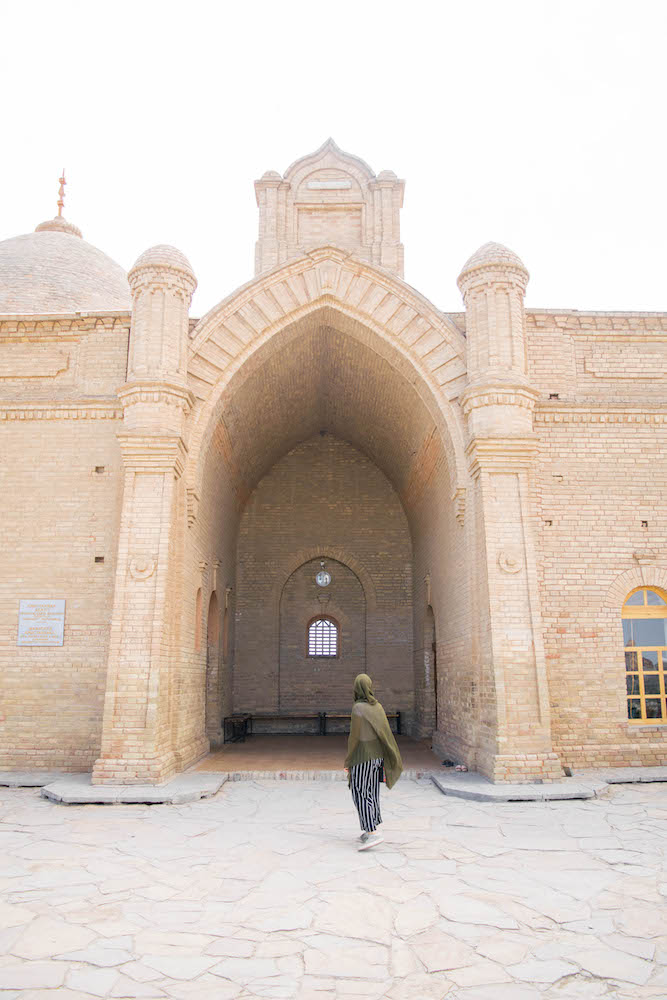 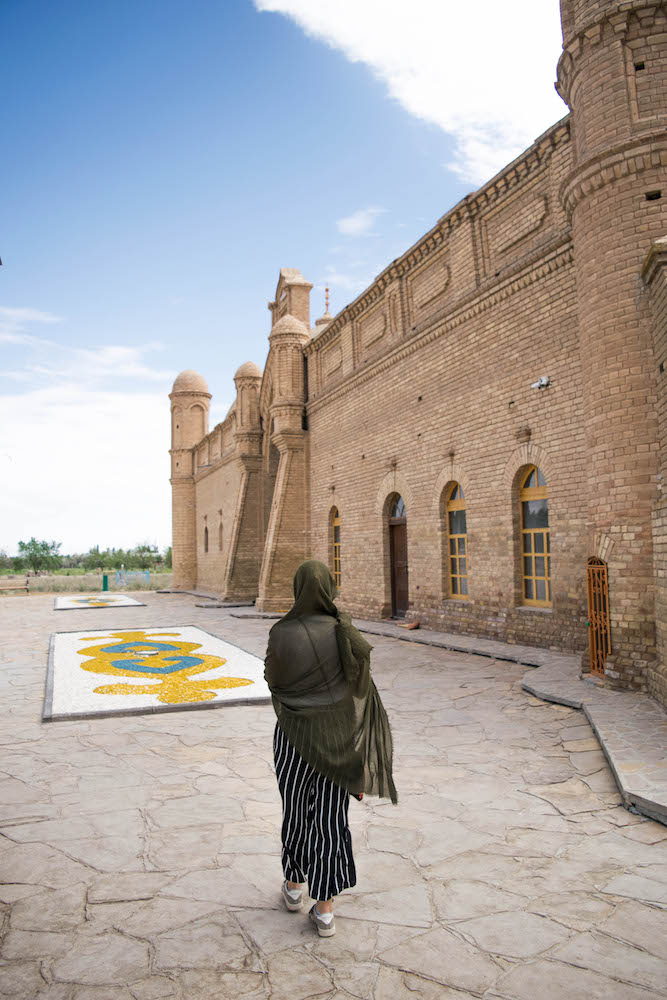 How to travel to Turkistan

Travel by train to Turkistan

There is a train stop in Turkistan, which makes it possible to travel from Almaty or other big cities. Here you can find train tickets and information about the time, cost and more.

Travel by plane to Turkistan

It is also possible to fly to Shymkent, a city that lies 160 kilometers from Turkistan. From here you can easily travel to Turkistan by taxi.

Travel by minivan to Turkistan

There are minivans leaving from Shymkent to Turkistan that mostly leave in the morning time. Ask your hotel or host about this option, as we haven’t tried it ourselves and aren’t sure where to find them.

Travel by car to Turkistan

Of course you can also travel to Turkistan with a your own or rented car from anywhere. The biggest city nearby is Shymkent, so it would be best to rent a car from here, either with or without driver. There are also tours that can take you to Turkistan. 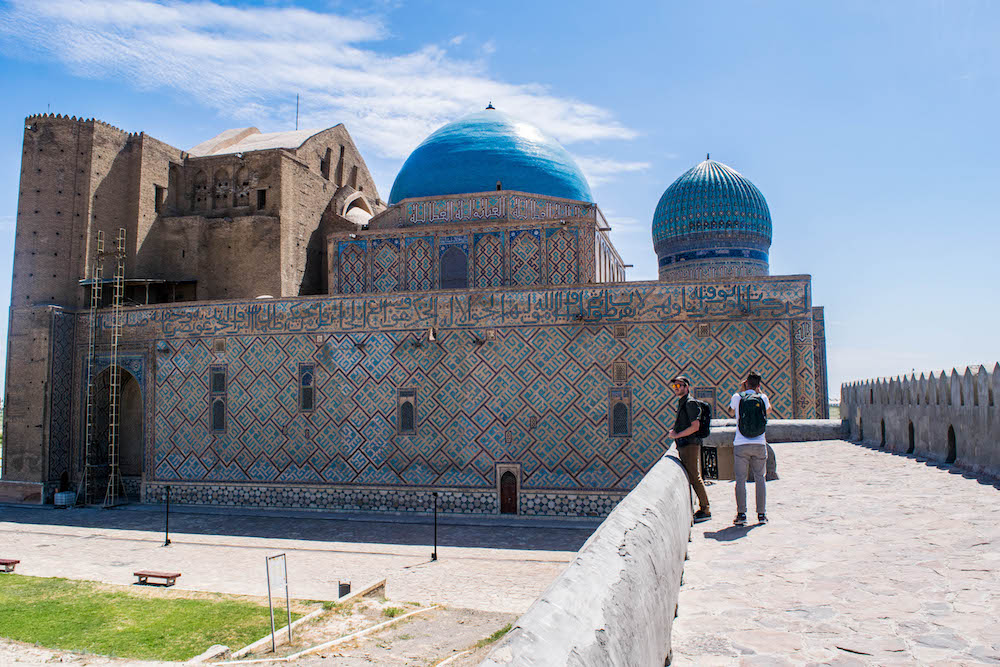 Where to stay in Turkistan

We also weren’t super happy about our hotel stay in Shymkent, so I did some research and found these two Shymkent hotels that seem to be okay:

That were some of the highlights of Turkistan and some practical information for your visit! Most of all, enjoy your time in Turkistan and take in all the history and culture of the place.

If you have any questions, comments or if you see any mistakes in this article, please comment below! 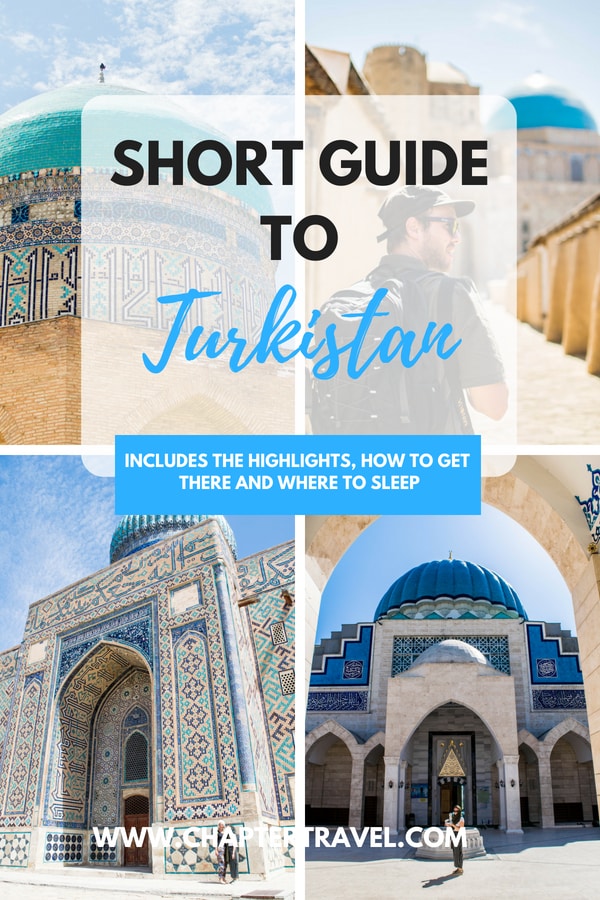