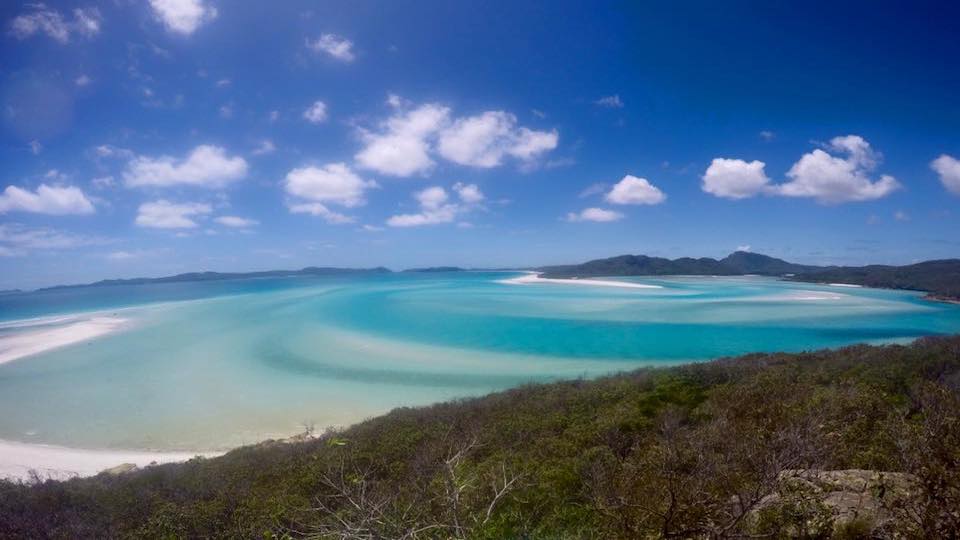 The Whitsundays are 74 islands on the beautiful tropical coast of Queensland in Australia. Because these islands are located right in the heart of the Great Barrier Reef, it’s popular place to dive and snorkel. Whitehaven beach has some of the whitest sand in the world and is absolutely one of the most beautiful places you can find. In three days we’ve visited these places, ate some great food and slept on a boat. We haven’t showered or had a good night’s rest for two days, but that actually added more to the whole experience. In this post we share our experience of our three day Whitsundays Cruise. 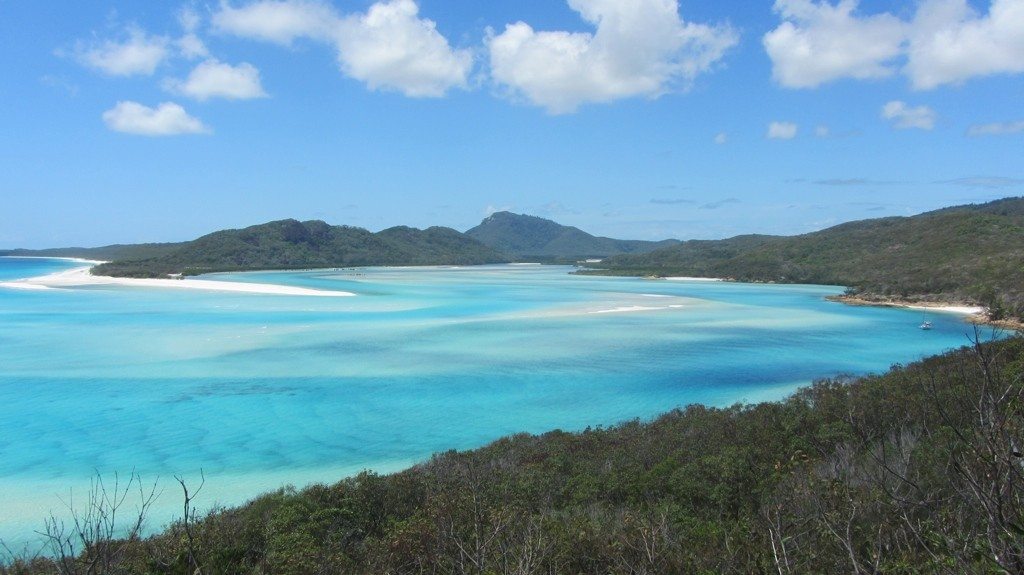 Once we were on the boat at 2 pm we started sailing for a few hours to our first stop for the night. Immediately there were great views from the boat and we stopped for a short swim along the way. In the afternoon we got some snacks, and for dinner we enjoyed some barbecued food. During the evening we did some good old-fashioned drinking games and got to know the other people on the boat a little better – including their most embarrassing sex stories. Around 9 pm it was already so dark that it felt later than it actually was. That’s why we went to our cabin to sleep early, but eventually that first night we didn’t sleep at all. The boat rocks back and forth, and if you’re in your cabin – a very tiny cabin actually – you keep rolling around in your bed.

This was the best day. We had to wake up at 6 am, but we were actually already awake because we just didn’t sleep at all. But, surprisingly, we weren’t really that tired. After eating a simple breakfast we sailed up to Whitehaven Beach. We were the first ones there, because it was early and it had rained a bit that night. First we were bummed out, because we were afraid it was going to rain all day – but after one big splash out of the sky the sun came and didn’t leave us the whole day. Whitehaven is really one of the most beautiful places in the world. Make sure you explore as much as you can on the beach, because there is so much to see. For instance; we walked along the coast and found stingrays and lemon sharks in the waters of Hill Inlet.

This beach is actually been named the South Pacific’s Best Beach by the 2015 TripAdvisor Traveller’s Choice Awards. That means one can really expect something special when you get there, and trust us; you won’t be disappointed. The water is crystal clear, you can see right through it. Whitehaven Beach is seven kilometers long of the whitest sand in the world. The sand is made of 98% pure silica and is of a finer grain than regular beach sand. This gives the white sand a softer feel. Moreover, silica does not absorb the heat from the sun, so you don’t burn yourself on the sand. What is quite a mystery is that the surrounding rocks do not contain silica, meaning that the sand on the island must have been deposited over millions of years of tides carrying the silica grains. Nobody is even sure where it came from.

The tide shifts the sand and water, creating a beautiful mixture of different blue and white colors. Every time you are visiting Whitehaven Beach, the looks of it are different, because the tide changes every day. It’s never the same; as the tide shifts, the view shifts as well. For a good view you can walk up to the lookout Tongue Point and here you can see the swirling of the turquoise water and white silica sand.

After Whitehaven Beach we sailed to two different spots to snorkel. Both were located at the Great Barrier Reef and we saw a lot of fish, turtles and more. That night we stayed at Blue Pearl Bay and had a simple, tasty pasta for dinner. We already made up our mind that we wouldn’t sleep in our cabin again – to hot and to shaky. After some drinks and again some (strange) drinking games, we slept on deck. We slept much better – it was cooler because of the wind, you didn’t feel the boat rocking as much as in our cabin and we were able to watch the stars all night. 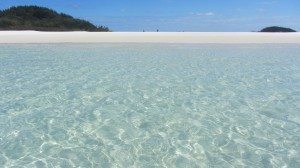 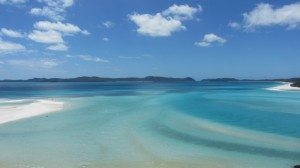 Swirl of the white sands and turquoise waters at Hill Inlet. 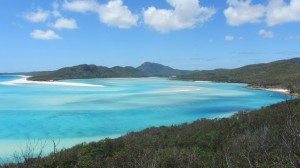 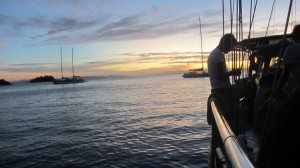 Boat during the sunset.

On the boat during the sunset. 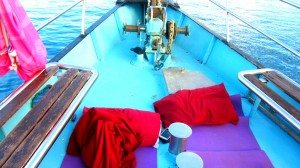 We woke up early again and had breakfast. We could immediately go snorkeling, because we were already at the right spot. According to one of our crewmembers Blue Pearl Bay is the best place to snorkel the Great Barrier Reef in Queensland. For us it was the best place we’ve ever snorkeled. There were fish everywhere, and the coral is so beautiful to see. We had so much fun! After snorkeling we sailed back to Airlie Beach and we made sure we booked a nice Airbnb so we could take a shower. On the boat you can only rinse yourself for three minutes maximum a day, without any soap or shampoo.

The Great Barrier Reef is probably even more amazing as you can imagine – at least that was what it was like for us. Located off the coast on Queensland in northeastern Australia, this enormous underwater world is actually the largest living thing on Earth and is even visible from outer space. The ecosystem is 2,300 kilometers long and consists out of hundreds of islands and thousands of reefs. The Great Barrier Reef is home to turtles, sharks, starfish, dolphins, crocodiles, countless sorts of colorful fish, more than 100 species of jellyfish, 133 types of sharks and rays and 600 types of soft and hard corals. Turtles and crocodiles have even been around there since prehistoric times! Just to give an idea how big the Great Barrier Reef is: it’s bigger than the United Kingdom, Switzerland and The Netherlands combined.

That was our trip to the Whitsundays! There are many tours you can choose to go on. If you want some more info on the tour we went on check it out here. We had a good time and did not regret our decision once.