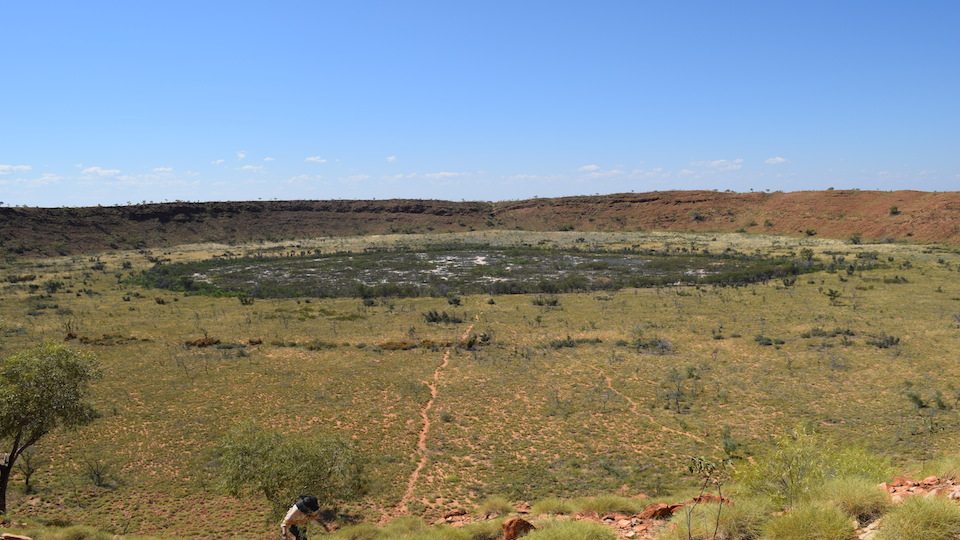 Have you ever heard of the movie Wolf Creek? It’s an Australian horror movie from 2005 that was filmed at the Wolfe Creek Meteorite Crater. During our time in the Kimberley region we stayed in an outback town called Halls Creek, which was close to the Wolfe Creek Crater. So of course we took the time to visit this place. The Wolfe Creek Meteorite Crater was made about 300,000 years ago when a meteorite crashed into earth, which created the second largest crater in the world in which meteorite fragments have been found. Now you can visit this place, and to be honest – it’s not more than a big crater.

In this post we talk about the Wolf Creek movie and whether it’s really based on a true story. Furthermore, we share facts about the Wolfe Creek Meteorite Crater and things you need to know before you go.

So it’s barely possible to write this post without mentioning the well-known horror movie Wolf Creek, an Australian horror movie from 2005. Before we moved to the outback we actually already heard a lot about it and were quite excited when we learned that we’re pretty close to the actual crater where this movie took place.

Watch out, I’m spoiling some of the movie these next few lines.

The movie is about three backpackers in Australia, two girls and one guy, that stop in Halls Creek for one night and the next day they go to the Wolfe Creek National Park to visit the meteorite crater. When they get back from their hike, their car won’t start. A local rural man stops by and offers to help them by towing their car to his camp. Even though they seem hesitant, they finally agree and come with him to an abandoned mining site.

After getting drugged, the three of them are tied up or nailed to something – I’m not getting into detail here, but eventually the two girls get murdered by the man, and the male backpacker escapes. The bodies of the two girls were never found. Before one of the girls get murdered, she finds out that the man has been doing this to several backpackers, so basically he’s a serial killer.

The movie Wolf Creek was advertised as being based on real events. So, what’s real about Wolf Creek? First of all, just a minor thing – the movie is called Wolf Creek, while the real crater is called Wolfe Creek. I don’t know if they did this on purpose or that it’s really a misspelling of the name. Furthermore, the influence of the movie is an abduction that really took place, namely that of Peter Falconio and his girlfriend Joanne Lees by Bradley John Murdoch in 2001. But it took place in the Northern Territory, not Wolfe Creek Meteorite Crater; which is located in Western Australia.

Wolf Creek had influences from other murders around Australia as well, such as the famous Ivan Milat backpacker murders. Ivan Milat was a serial killer who picked up backpackers who were hitchhiking and took them in the woods and tortured and killed them. These murders did not take place in the outback, but in New South Wales. So basically, it’s a movie that just took some inspiration from true horror stories in Australia, wrapped together as one, and is set in the amazing location of the Wolfe Creek Meteorite Crater.

Now we got the movie Wolf Creek out of the way, we can talk about the real deal: the Wolfe Creek Meteorite Crater. About 300,000 years ago a meteorite crashed into earth, which created the second largest crater in the world in which meteorite fragments have been found. The weight of the meteorite is estimated at 50,000 tones and is thought to be traveling at 15 kilometers a second. The meteorite’s impact punched a hole in the ground, smashing the rocks beneath. Due to the massive explosion the fragments of the meteorite was scattered around four kilometers away of the crater. After the meteorite impact the crater developed it’s own eco-system. The rocks and soil in the crater is different from the surrounding desert.

Aboriginal people Jaru and Walmajarri call the Wolfe Creek Crater Gandimalal and knew about the existence of the crater for thousands of years, long before Europeans discovered the crater during an aerial survey in 1947.

The crater is currently only 20 meters deep, but this was once more than 100 meters deep. Over the years, sand has been blown in to the crater, filling it up higher and higher.

1. You need a 4×4 wheel drive for the Wolfe Creek Crater 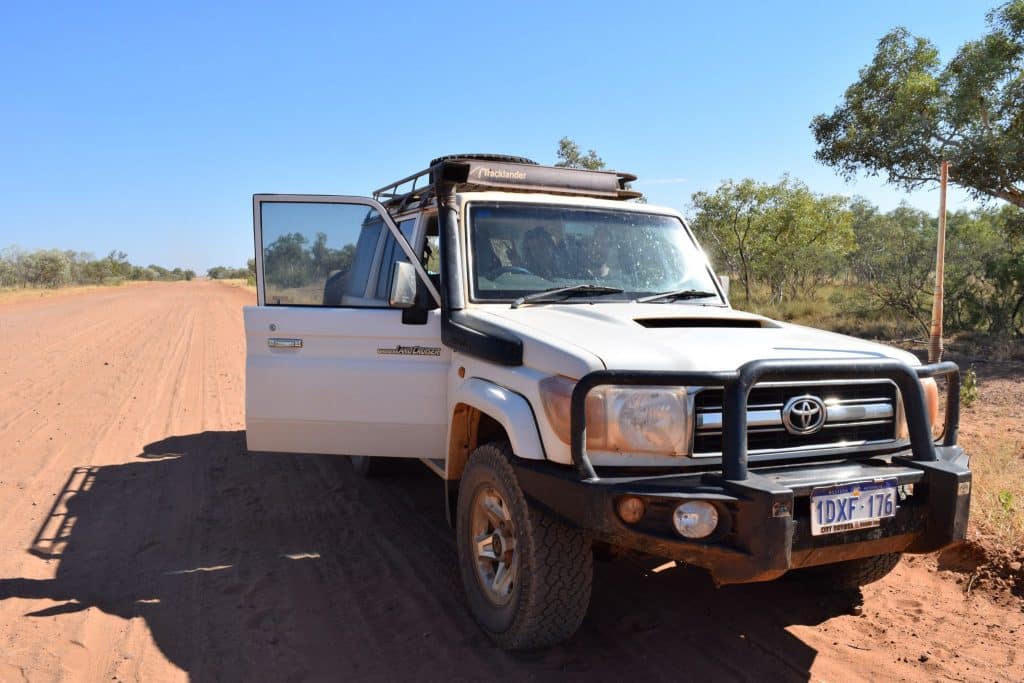 First things first: you really need a 4x4wheel drive for this road trip, as the only way to get to the crater is via a dirt road. Know that this road is not always accessible; sometimes it’s flooded due to heavy rainfall.

The best times to visit the Wolfe Creek Crater is from May to October, when the dry season has started and the temperatures are not too high. However, at this moment it’s supposed to be the dry season, but last few days it has been raining. Thus, always be sure to check online or at an information center in the town nearby before you make the drive.

The closest accommodation, fuel and supplies are available 145 kilometers further at the happy old town of Halls Creek. Make sure you get water and supplies with you, as there is no water available and you will get thirsty! We were really craving a ice cold drink after the walk!

2. It’s not recommended to climb into the Wolfe Creek Meteorite Crater 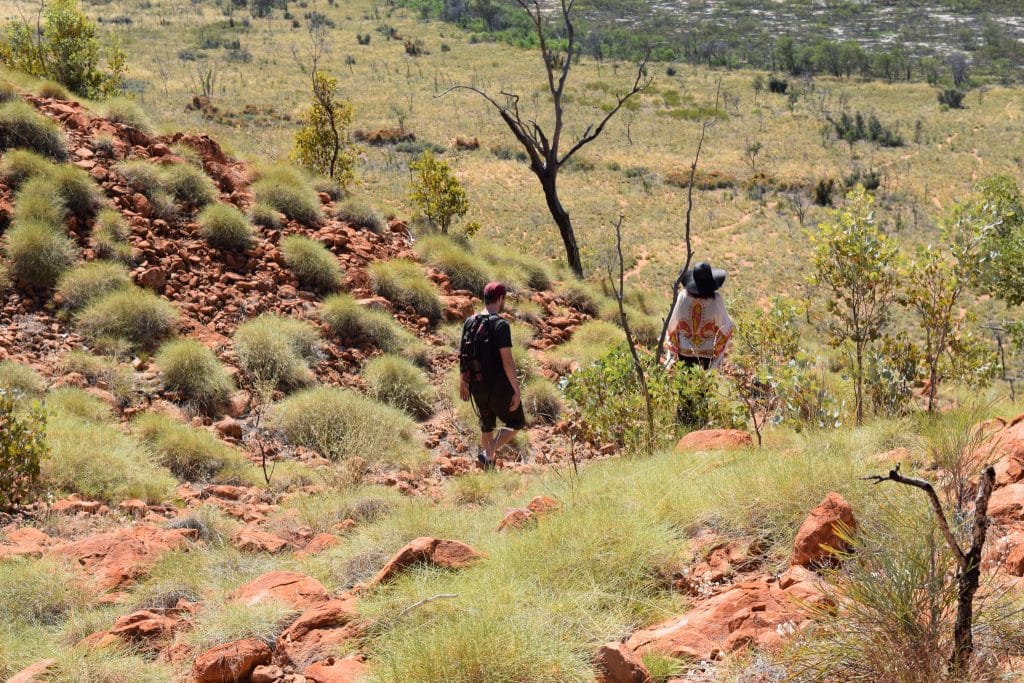 When we arrived at the Wolfe Crater, we didn’t really read the information signs. We kinda went straight into the action and climbed up to the crater rim and decided to walk into the crater. Afterwards we learned that it’s not recommended to climb down into the crater, because of loose rocks and a sleep terrain. A lot of people do climb in and out of the crater, but please take that into mind that it’s at your own risk. We did notice that it’s quite hard to walk down, but it is manageable if you just take it slow and easy.

3. You can camp for free at the Wolfe Creek Meteorite Crater 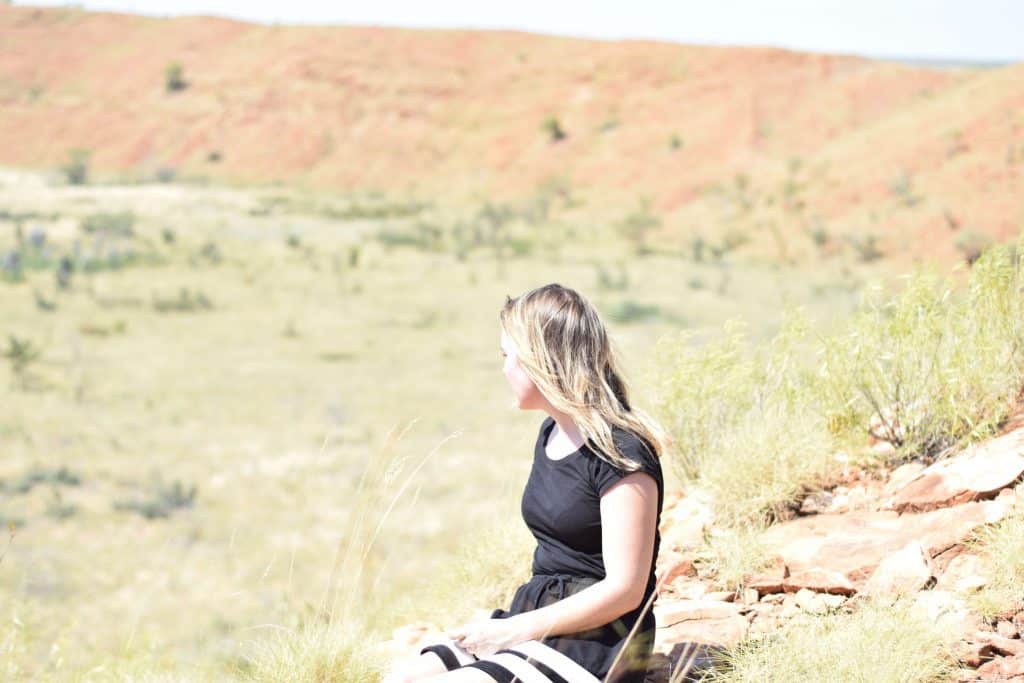 Either you go for a day tour just like us, or you can decide to be even more adventurous and spent the night camping. In the national park there is a free camping area that includes sites and toilets. Be aware that other than toilets, basic campsites and an information shelter, there are no tourist facilities provided at the crater.

We’ve heard that it’s amazing to stay the night. You can watch the sun go down sitting at the rim of the crater, and the stars at night. We can imagine you’ll be able to see a lot of stars at night, because there are no other lights around the crater. In the morning you can wake up early and watch the sunrise sitting at the rim, or go into the crater and watch it coming up above the rim.

4. There is a scary abandoned house near Wolfe Creek Crater 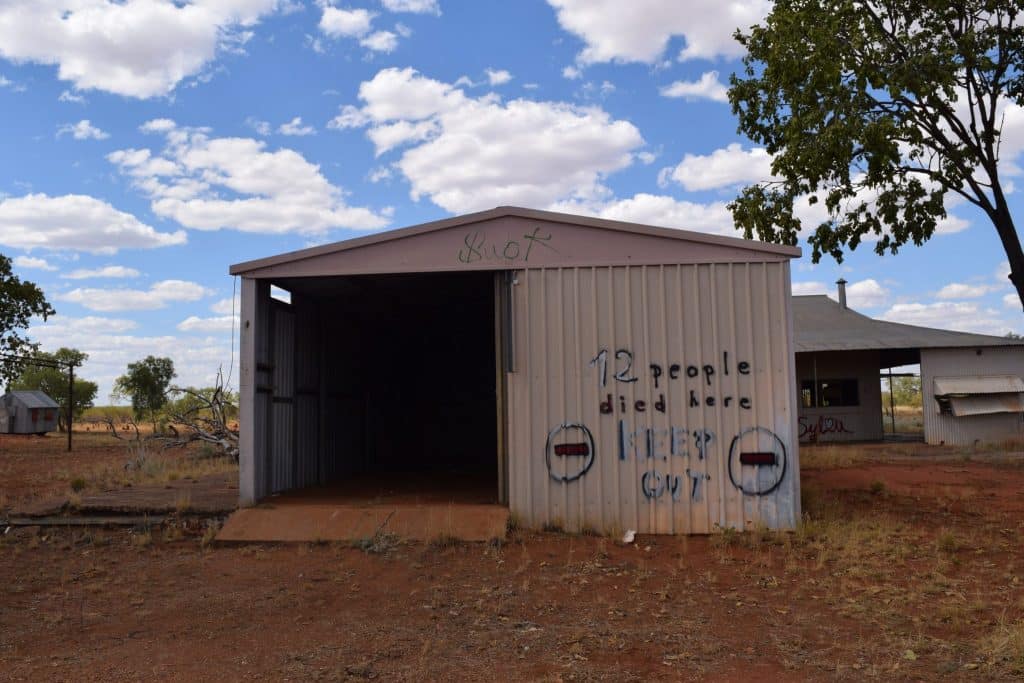 Deserted house on the road to Wolfe Creek. 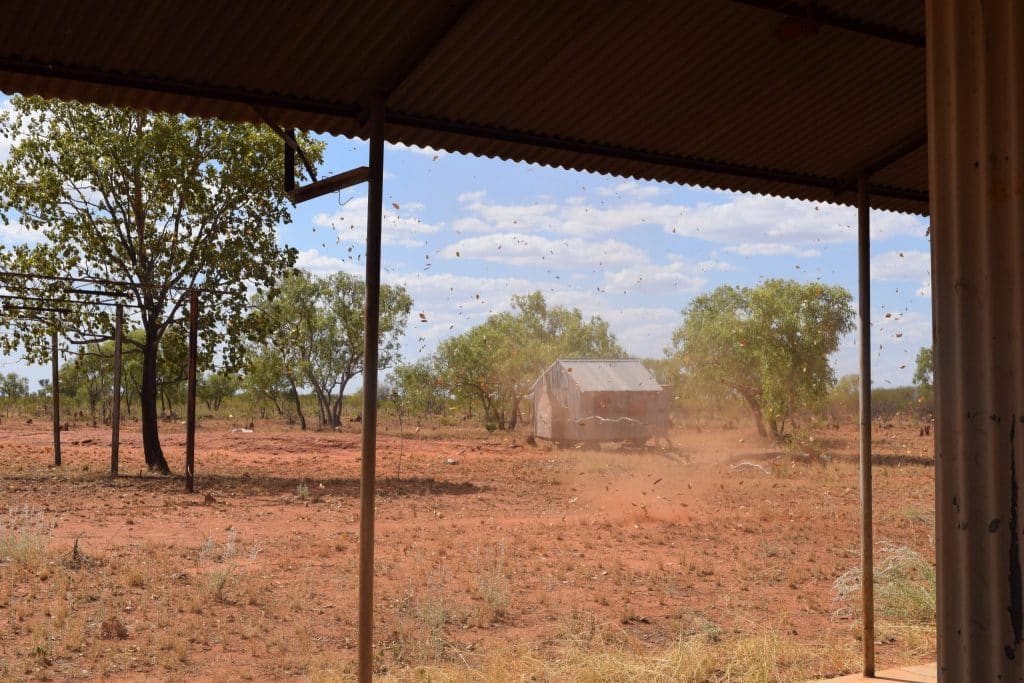 We actually saw a small tornado.

We took a lot of photos during our hike at the Wolfe Creek Crater. You can also see images we took of a house – or whatever it was, that we found driving up to Wolfe Creek. It looked like a deserted farm or slaughter house of some sort. When we googled it, we could not find any information on it. If you happen to know more about this place, please let us know!

One of the houses was written: “12 people died here. Keep out”. I’m 100% sure that it’s just the job of some kids that are joking around, but the place did definitely have something eerie about it. Also interesting: while we were taking photos of this weird abandoned house, out of nowhere a tornado formed in front of us!

You could say that Wolfe Creek Meteorite Crater is not much more than a hole in the ground… On some level I really agree, because the only thing you can really do at the Wolfe Creek Meteorite Crater is walking around… But, it’s a quite impressive idea to think that a meteorite struck in there 300,000 years ago. And it’s definitely a beautiful (somewhat scary because of the movie) place.